Who is Captain Bill Robertson?

Bill Robertson, “Captain Bill” or “CBR” was a very colorful and popular Scientology figure who is still revered to this day especially in Europe where he spent many years building Scientology organizations and the Ron’s Org network.

CBR had an intense technical training. He did the Class VII course and internship in Saint Hill around 1966 and was appointed Director of Review by LRH. Later on the Apollo he did his Class VIII course.

CBR did many missions to various orgs and AOs. He also held at various times temporary CO posts, e.g. at the Flag Bureaux in Clearwater around 1980. He was assigned several Power- conditions for his accomplishments. A commendation for one mission is mentioned in FO 2376 of March 1970.

CBR was awarded the rank of “Right Arm” (RA), granted the title of Captain and he was 2nd Deputy Commodore (1st deputy was Mary Sue Hubbard). He also as one of very few people was awarded the Sea Org Officer’s Dirk. Finally, with the Flag Conditions Order 381-1 of April 30, 1975, he gained another special award by LRH: “Captain W. B. Robertson, Right Arm rank, is hereby awarded the status of Kha Khan for excellent duty as Captain of Flag ship Apollo and a long career of success and high statistics in the Sea Organization.” Originally in the times of the Mongols “Kha Khan” meant that a person who was Kha Khan will be forgiven the death penalty ten times – in the Sea Org it changed to mean that a Kha Khan could get away with nearly everything and still had Ethics protection. Of course this did not mean an invitation to behave like a criminal, but was a symbol of the high trust LRH had regarding this person 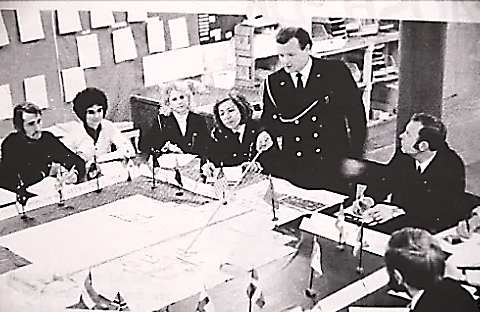 Under Capt. Bill in the three golden years, 1970-73 at EULO in Copenhagen, (where EULO stands for European Liaison Office). Europe was booming. There was no suppression, almost no use of ethics. No declares. No RPF. When he started there were 3-4 staff members in Munich Org (Germany), When he left there were 80.